Sunstone is a gem-quality member of the feldspar group of minerals. It is famed for its aventurescence, often referred to as 'schiller'. Sunstone may also be traded as 'aventurine feldspar', but nowadays, the term 'aventurine' is primarily used only in reference to the green quartz known as 'aventurine'. Not all sunstone exhibits strong aventurescence or schiller. The intensity of the optical phenomenon depends upon the size of inclusions, which are typically composed of hematite or goethite. Smaller inclusions tend to exhibit more sheen, while larger inclusions generally appear as glittery, spangled metallic reflections. 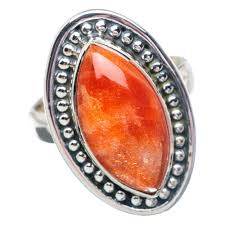 Sunstone is typically red-brown in body color with a metallic shimmering effect caused by tiny platelets of hematite, goethite or pyrite. The sunstone from Oregon, USA, shimmers due to copper inclusions. Sunstone schiller usually results in a gold, red, orange or yellow shimmer, but occasionally, it can also occur green or blue.

Although sunstone deposits can be found in various locations around the world, there is no single source from which it is commercially mined. Some of the more significant, notable deposits come from India, Canada, Madagascar, Norway, Russia and the USA (Oregon, Pennsylvania, North Carolina and Utah). Oregon, USA is famous for producing sunstone included with traces of copper.

Believers of paganism and Wicca often use sunstone for alternative and crystal healing. Traditionally, sunstone is linked to good luck, fortune and wealth. In ancient times, this stone was used by natives for trade and barter. Sunstone was believed to have been worn by the Vikings as talismans and used for navigation because it was associated with the sun. It was often used to call upon the power and influence of the sun and was used as a protective stone. In ancient Greece, sunstone was thought to symbolize the sun god. Many believed it could bring warmth, life and abundance to those who wore or possessed it.

Lodha Gems is a gemstone shop in India (India), we have natural Sunstone in stock which are certified, our Sunstone are procured directly from mines and our natural Sunstone are free from any treatment, if you want to buy Sunstone then feel free to contact us at +91 94335 46997, we ship worldwide.