Lapis lazuli, often referred to as just 'lapis', has been used as a gemstone for thousands of years. It has been mined from Afghanistan since the early 7th millennium BC, and it was discovered in ancient burial sites throughout the Caucasus, the Mehrgarh and even as far as the Republic of Mauritania. The funeral mask for the ancient Egyptian pharaoh 'King Tut' was even discovered to have been decorated with lapis lazuli.

Lapis usually forms in crystalline marble through the geological process of contact metamorphism and due to its composition, it is technically defined as a rock rather than a mineral. It is primarily composed of lazurite, while the remaining composition is made up of sodalite, calcite, pyrite and other various minor constituents. The varying composition is what influences its exact coloring. 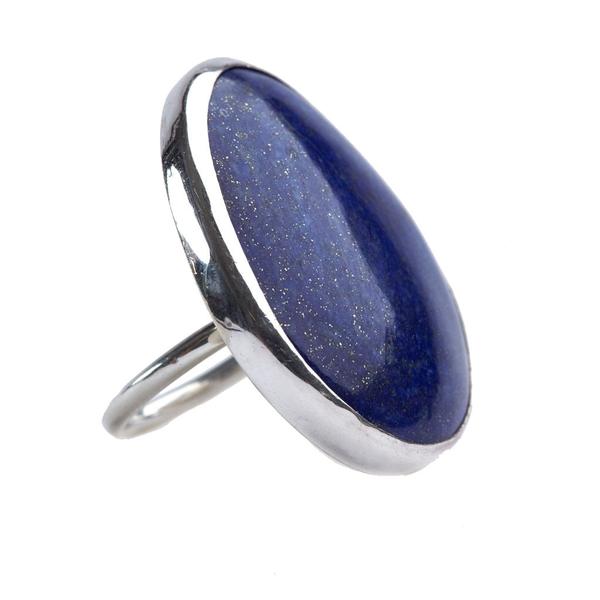 Although the colour of lapis lazuli is defined by its name, 'the blue stone', its colors can actually range from slightly greenish blue to violetish, medium to dark and from low to highly saturated. The blue is owed to sulfur coloring agents. The finest stones exhibit an evenly distributed color and have no visible deposits of calcite, although a moderate amount of gold pyrite flecks is considered acceptable. Too much pyrite can result in a dull, greenish tint, while calcite can predominate the mix, giving the stone an overall less appealing lighter blue shade.

Discovered 6000 years ago, the oldest lapis lazuli deposits are located in the difficult terrain of the West Hindu-Kush Mountains in Afghanistan. Today, Afghanistan is known to produce the finest quality lapis lazuli and is also the most significant source. Other commercial deposits have been also found in Angola, Argentina, Canada, Chile (North of Santiago), India, Italy, Myanmar (Burma), Pakistan, Russia and the United States (California and Colorado).

Lapis lazuli is a real veteran in the illustrious history of gemstones. Indeed, it was used as jewelry as early as prehistoric times. In the Middle Ages it gained additional popularity as a pigment to produce ultramarine color for painters or to tint cloth. Some palaces, churches and mosques throughout the Middle East and Europe display wall panels and columns with lapis lazuli inlays. For people around the world, lapis lazuli is considered a stone of truth and friendship. The blue stone is reputed to promote harmony in relationships. Historians believe the link between lapis lazuli and human beliefs dates back over 6,500 years. The stone is believed to have been highly prized by many ancient civilizations, including Egyptian, Mesopotamian, Chinese, Roman and Greek.

In antiquity, as well as in the Middle Ages, people believed that the cosmos was reflected in gemstones. Lapis lazuli is assigned to the planet Jupiter. The healing powers of gems remain a controversial issue, but have been mentioned for centuries by healers, shamans and medicine men around the world. Whether it's based on fact or is merely a placebo effect, it truly doesn't matter as long as it helps those in need. Lapis lazuli is said to be of help for headaches, sore throats and varicose veins. It is also known to help with alleviating cramps, stiffness and fertility problems.