Fossil coral is a natural gemstone that is created when prehistoric coral is gradually replaced with agate. Corals are marine animals and it is their skeletons that are fossilized and preserved. The fossil coral forms through hardened deposits left by silica-rich waters. The entire process can take over 20 million years.

Fossil coral deposits are often used for the making of health and drug supplements because of their high calcium, potassium, magnesium and sodium content. Because fossil coral can remove chemical impurities such as chlorine and formaldehyde it is used in industrial fertilizers and water purification filters.

Fossil coral should not be mistaken for endangered or protected reef coral or precious coral. It is considered to be a type of agate or chalcedony, rather than a type of coral, due to its silicon dioxide composition (SiO2). Coral deposits have been mined and commercialized for their high calcium, potassium, magnesium and sodium content, and are often used for the making of health and drug supplements. Fossil coral is used in industrial fertilizers and water purification filters because it can remove chemical impurities such as chlorine and formaldehyde. 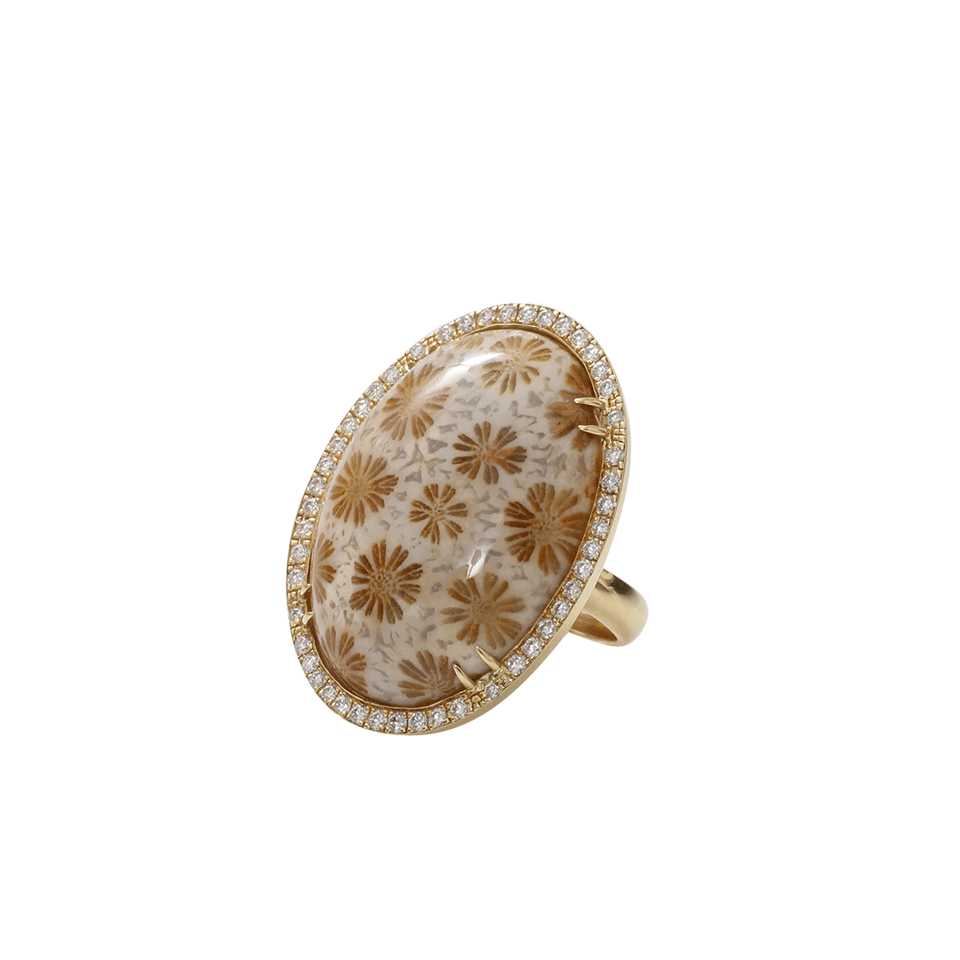 Agatized fossil coral can exhibit a wide range of natural colors, ranging from white and pink, to brown, gray, black, yellow and red. Coral color may vary widely within a single stone, depending on weathering, oxidation and the original mineral content.

Fossil coral is typically opaque, but some specimens may appear near-translucent. When cut and polished, they have a waxy to dull luster.

Almost all fossil coral specimens are found in either Indonesia or the United States (Florida and Georgia). Florida has even declared agatized fossil coral as their official 'Florida State Rock'. Indonesian fossilized coral is considered to be the most desirable and unique. In Indonesia, entire coral heads are often found perfectly preserved, appearing exactly as they did 20 million years ago, though density may vary according to the exact chemical replacement of silica, manganese, iron and other various minerals.

Since fossil coral is a combination of coral and agate, it carries many strong metaphysical beliefs. Agate is associated with the zodiacal signs Scorpio and Gemini, and agate is said to be ruled by the moon. It is a grounding stone and is supposedly good for bringing about change. Physically, agate is thought to be able to help heal pancreatic disorders and improve blood and air circulation. It is used for healing illnesses of the eyes, skin and stomach, is even believed to enhance longevity.

The Romans hung branches of coral around the necks of their children to protect them from danger. In the early 20th century, the people of Italy used coral for protection from the 'evil eye' and many Italians used it for infertility. Among the Hopi and Zuni tribes, the 'road of life' is symbolized by coral, jet, abalone and turquoise (the four elements). Although coral is not a traditional birthstone for any month, it is a non-traditional zodiac stone for Taurus. Reddish and orange colored coral stones are thought to benefit the root and spleen chakras by providing energy and warmth.