Tsavorite garnet is a green to emerald colored variety of grossular garnet, which is composed of calcium aluminum silicate. The intense green of tsavorite is owed to traces of vanadium or chromium. This desirable hue can cause tsavorite to be mistaken for fine emeralds. The name "tsavorite" comes from the place where it was first discovered; Tsavo National Park in Tanzania on the borders of Kenya and Tanzania. To this day, this area is the only source of tsavorite garnet. 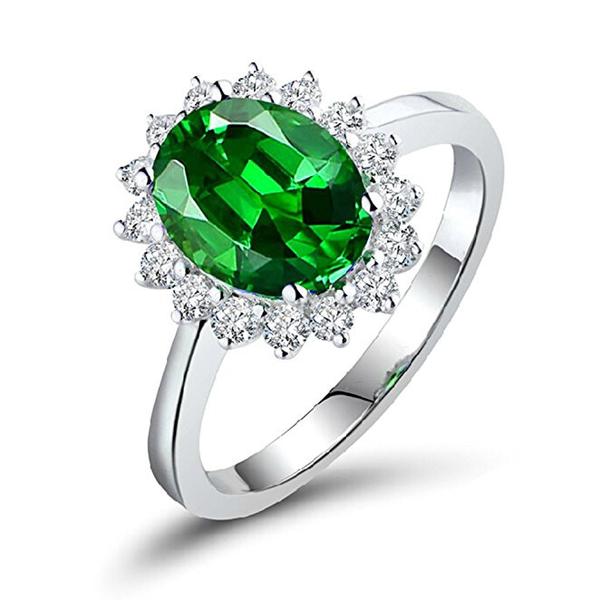 Tsavorite garnet ranges in color from bright yellowish green to deep green or bluish green. The most desired color is an intense, highly saturated green, or a medium bluish to medium-dark green.

Tsavorite garnet is only found in Africa, on the border of Kenya and Tanzania.

Garnet is thought to promote successful business, encourage compassion and aid self-confidence. Garnet is said to have the ability to heal the blood and encourage good circulation. Garnet is the traditional birthstone for January, the zodiacal stone for Aquarius and the second anniversary stone.

In particular, tsavorite garnet is thought to provide its wearer with strength, vitality and positivity. It is also believed to help the immune system, respiration, metabolism and detoxification. Due to its green color, traditional Hindu belief systems associate tsavorite with Anahata, or the heart chakra. This chakra relates to love, compassion, psychic healing and decision making. Thus tsavorite is thought to be helpful in calming the emotions. Tsavorite garnet is an alternative birthstone for May, due to its green color According to feng shui beliefs, tsavorite carries wood energy, which is considered good for growth.