Moldavite, also known as the 'Bouteille Stone' or as 'Vltavin' in Czech, is an olive-green to dull brown-green vitreous gemstone. The unusual green gem garnered much fame and attention owing to its unusual origin. Moldavite was thought to have been formed by condensed rock vapors after a meteorite impact. Moldavite belongs to the Tektite group of minerals, which is a small family of natural glass rocks. Moldavite is sometimes touted as the only known extraterrestrial gemstone on Earth, or as the gemstone born from the stars.

Moldavite was once thought to be an artificial product, and for a long time, it was even believed to be a variety of volcanic obsidian glass. Moldavite was first introduced as 'chrysolites' by Professor Josef Mayer of Prague University. Later, the name 'chysolites' was replaced by 'moldavite' as it was to be named after 'Moldauthein' the town of where the first specimens of were discovered and described. Gem-quality moldavite is typically offered in two grades; regular and museum grade. The finest specimens are museum grade. Museum grade moldavite exhibits higher transparency and displays a distinct fern-like pattern. Regular moldavite is typically darker green, often brownish in color and its surfaces appear pitted or weathered. 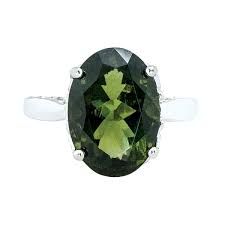 Moldavite occurs in a variety of shades of green, including deep, forest-green and pale to olive-green. Some materials from Moravia are known to occur with greenish-brown color. The most desirable color is a pure, light to medium green with no brown, and not too dark in tone.

Moldavite gets its name from the town of Moldauthein in the Czech Republic, where it was first found. Currently, moldavite deposits have been found in Southern and Northwestern Bohemia, Western Moravia, Lusatia (Germany) and Waldviertel (Austria). It is estimated that 99% of all moldavite is sourced from South Bohemia and 1% is sourced from South Moravia. Small, scattered findings of gem-quality moldavite have also been reported in Dresden, West Bohemia and Austria.

Moldavite is not a traditional birthstone but it is a natural birthstone for those fortunate enough to be born during mid-spring; between April 20 and May 20. Although moldavite is not associated with any specific zodiac sign, it is considered a stone of the stars and therefore is a universal gem for all astrological signs. Physically, moldavite is thought to help alleviate gout, asthma, allergies and rashes, and help overcome symptoms of flu, anemia and colds.

According to Czechoslovakian legends, moldavite was thought to bring good luck to its wearer. It was commonly used to help harmonize marital relationships and for creating talismans and amulets, thought to bring good fortune, protection and help with fertility. Throughout the Middle Ages, moldavite was highly prized and was strictly reserved for those born of royal blood and nobility. In Sanskrit, moldavites name is agni mani which means fire pearl. Moldavite is associated with the mystical bird; the phoenix, which was said to have been consumed and reborn by fire.